The JDT Plugin CQTP replaces fully qualified type names with simple type names and adds the missing import statements. For example „new java.util.ArrayList()“ will be changed to „... import java.util.ArrayList; ... new ArrayList()„. The plugin manipulates the abstract syntrax tree which is produced by the JDT integrated parser. There is no undo functionality except the modified file is currently opened within the Eclipse Editor (to undo use control-Z).

In the example section you can see two screenshots. The first screenshot is the input, the second one is the output. The changes are marked in the screenshot.

Add the update site to your Eclipse installation and install the plugins you wish.

The plugins are published under the Eclipse Public License – v 1.0. 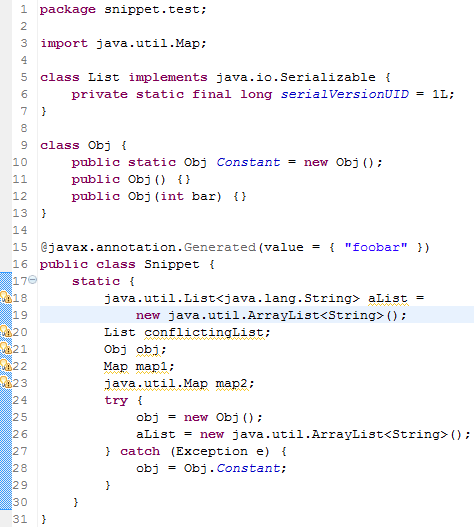 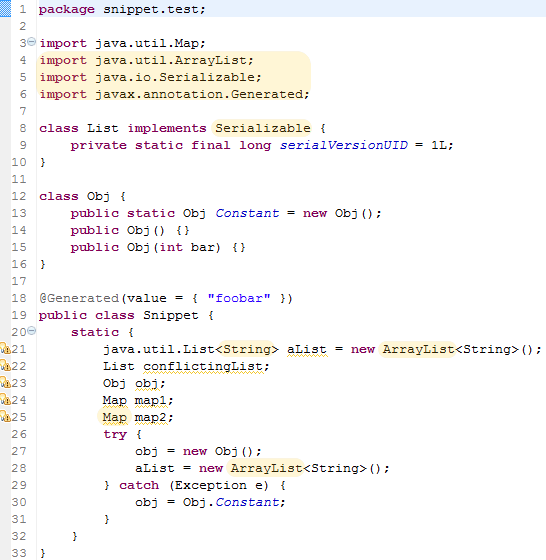 Note: I removed the line break in line 18 manually. 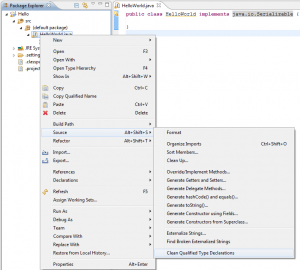 Screencast of the JDT integration.

To use the integration you must install the Xpand integration feature. You must also add the following dependencies to your MANIFEST.MF file of your generator project:

The integration class CleanFullyQualifiedTypes implements a postprocessor for a generator configuration. See the usage in the following example:

Since release 0.0.3, a group based sorting for import statements is also possible. The postprocessor provides the property organizeImports. The value can be either „true“ or „false“. „false“ is the default value. If the value is „true“, you will be able to configure a list of import groups by using the tag importGroup. If you have a protected region within your imports, the feature must be disabled. See the following example postprocessor configuration with enabled sorting and some import groups:

Screnncast of the Xpand integration: Xpand Integration In Action (10 MB) (Note: in the screencast the integration class will be used from the package mwe but the package was renamed to xpand before the first release was created.)

Why not using the new ONFILECLOSE keyword instead?

With high intrest I read the documentation of this new feature and than I decided it is code smell for handling Java imports. This is because it should be possible for each DEFINE statement to add imports to the list, so the import list variable must be given to each DEFINE declaration as a parameter. Otherwise you have no chance to enrich a generator for example with a generator aspect, which requires some new types which must be added to the import list. In a fine-grained generator with lots of DEFINE statements, this does not make it easier to read and develop generator code if you always have to pass this variable to each DEFINE statement. Beyond that it is not possible to handle import conflicts as seen in the example section. This should be killer arguments for not using it for Java imports and instead using a postprocessor and generating against fully qualified types. You also won’t be responsible for code formatting and using the configurable build in formatter of Xpand, the same arguments for using a formatter are also valid for handling imports.